Boylesports: Crossing the sea at last 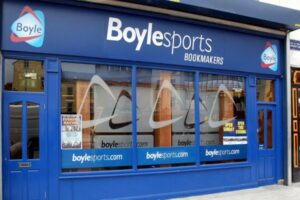 Boylesports, one of Ireland’s big-three bookmakers have confirmed they are in advanced talks to acquire a number of high street shops from rival bookmakers and enter the UK retail market in early 2019. They are apparently close to landing the acquisition of a chain of UK bookmakers. Who that remains a secret at the moment but by all reports, it is likely that the deal will be closed during the first quarter of 2019.

Boylesports have been keen to get into the UK retail market since 2016 when they failed to get over 350 UK stores which were up for grabs because of the merger between Ladbrokes and Coral. Competition rules meant that that particular merger could only proceed with selling off some high-street stores.

Boylesports CEO Conor Gray said the following “It is still an ambition because our data, our history, will tell you if you have a retail presence, it will help your digital business, and vice versa,” Gray said. “So we have the ambition to be in the UK.”

The operator has a very strong UK online presence and have been strong with their revenue growth. They have been looking to feed off that positive identity which they have, by getting into brick and mortar stores across the UK.

There are changes coming in the UK scene as well though. The new Fixed Odds Betting Terminal(FOBT ) limits will come into place next April, which restricts stakes to £2 (from £100).

UK bookmakers are set to endure potentially significant losses with the new FOBT. So, a lot of the current big players in the UK market, the likes of Ladbrokes-Coral, William Hill and Paddy Power-Betfair have been directing their attention elsewhere. The US market is starting to open up and that is prime stuff for them all to have a look at.

Despite the new regulations, Boylesports wish to enter the UK market as they see it as an effective way to increase their online presence to the UK market. Gross gambling yield (GGY) topped £14.4 billion between 2017 and 2018, according to UKGC. And they have billions reason why!