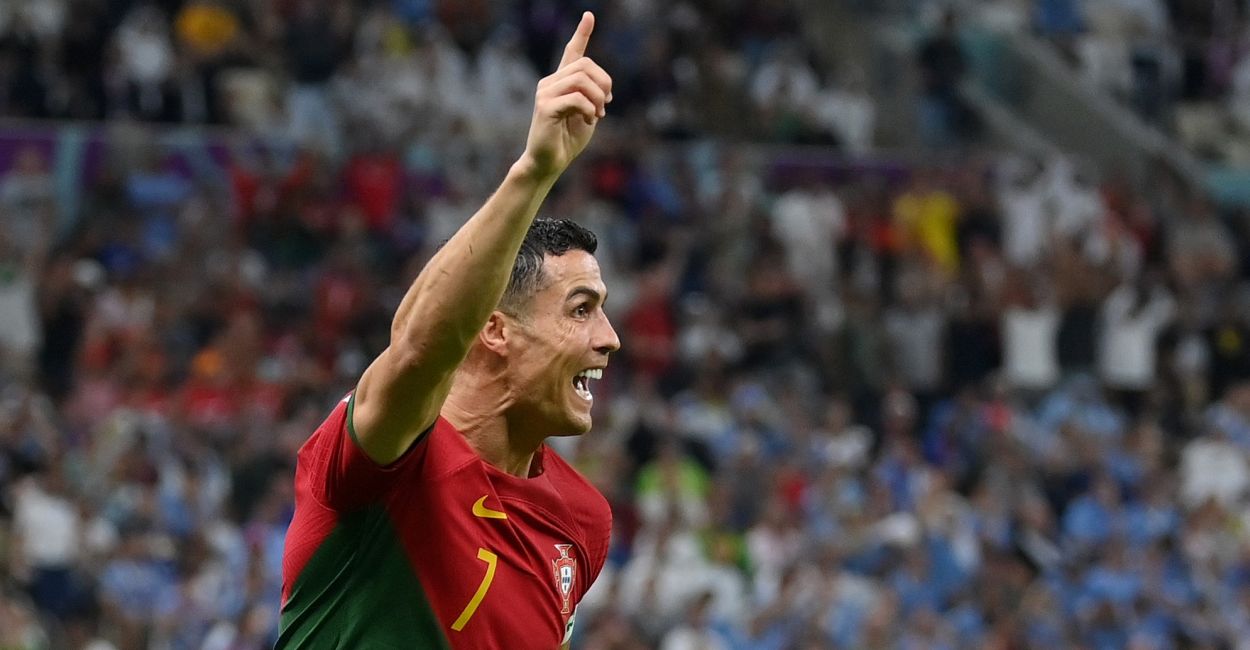 Like him or not, you cannot state that Cristiano Ronaldo isn’t one of the greatest footballers to ever touch a ball, nor how influential he is in this era of world football. His talent and his work ethic are not debatable, but still, there is a lot of negative vibe surrounding his name. It doesn’t matter. He is now a free agent and he is in the centre of the news, as the Cristiano Ronaldo transfer rumours are heating up.

Five Champions League trophies, seven league titles, a UEFA European Championship, a Nations League, five Ballons d’Or, and four European Golden Shoes. It is just incredible how much silverware Ronaldo has amassed over the years. His latest stint with Manchester United, however, was largely disappointing. Not only did he alienate himself from literally everyone at the club, but he also gave an interview where he battered the team and said he felt betrayed.

His wish was granted and his contract was terminated. He is now free to look for a new club. Initial reports tied him with a move to Chelsea or Napoli. Then you had his older teams, Real Madrid, and his childhood club, Sporting Lisbon, reportedly entering the race. But for the past few weeks, there are only two team names tied with the Cristiano Ronaldo transfer rumours. These are Al-Nassr from Saudi Arabia, and Inter Miami, over at the MLS.

The ties with the Arab world

Al-Nassr is thought to be offering a contract worth €200m. And mind you that Ronaldo already has close ties with Saudi Arabia. His agent and close friend Jorge Mendes owns businesses in the United Arab Emirates and Saudi Arabia. Mendes helped create the Globe Soccer Awards. An award that Ronaldo won 6 times (compared to Messi’s one win), while Mendes himself has been named Football Agent of the Year 10 times. Ronaldo was also named the Player of the 21st Century by Globe Soccer.

Spanish newspaper Marca recently reported that Ronaldo to Al-Nassr is a done deal, which will be confirmed by the 1st of January. But more recent reports state that nothing is yet set in stone. Al-Nassr’s chairman, Musalli Al Muammar, actually denied that there has ever been any offer for the Portuguese superstar, who is set to turn 38, two days after the winter transfer window closes.

How influential Ronaldo is in the Arab Peninsula as a whole was obvious in the recent World Cup. When his coach, Fernando Santos, elected to leave him on the bench for the Portugal vs Switzerland game, a whole stadium was chanting his name, demanding to see him on the pitch.

Another strong candidate is the MLS and in particular Beckham-owned Inter Miami. The league commissioner, Don Garber, said that the MLS wants and needs Ronaldo and is ready to help clubs get him to join them.

Al-Nassr, or any team from the Saudi Pro League, is the favourite to land the Portuguese star, according to the Cristiano Ronaldo transfer odds. Chelsea and Real Madrid are still high on the list, as are MLS clubs, Newcastle, and Sporting Lisbon.

The fun part starts when you get further down the list. There we can see Armenian clubs Pyunik Erevan and FC Urartu, as well as Georgian Dinamo Tbilisi. 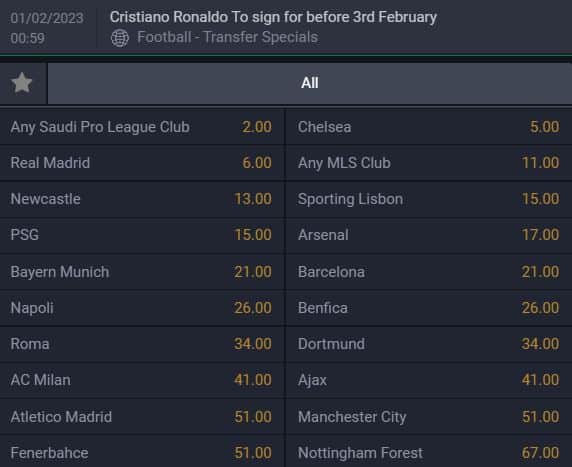