Remember when sceptics were fearing that Erling Haaland was going to need time to adapt to the Premier League? Do you remember when haters were saying that he couldn’t do what he did in the Bundesliga, a “farmers’ league?” Mind you that the German top tier is currently the third-best league in Europe, according to UEFA country coefficients, but who cares about facts, right? Well, Haaland has taken the Premier League by storm and is the favourite not only for the top goalscorer award but for the PFA Player of the Year Award as well.

The 22-year-old Norwegian phenom has proven that his talent knows no frontier. There is nobody who can stop him and has scored 18 Premier League goals in his first 13 appearances, adding up another 5 goals in 4 Champions League games with Manchester City. His collaboration with Kevin De Bruyne has scared opponents and what this Manchester City team can achieve behind the most lethal striker the club has seen is extraordinary.

PFA Player of the Year Odds

Erling Haaland is the huge favourite to win one of the most prestigious individual awards in England. He is currently offered at 1.28, ahead of his teammate, Kevin De Bruyne, who is at 6.50. From then on the odds skyrocket, as you can see on the list below. Click on it for more details. 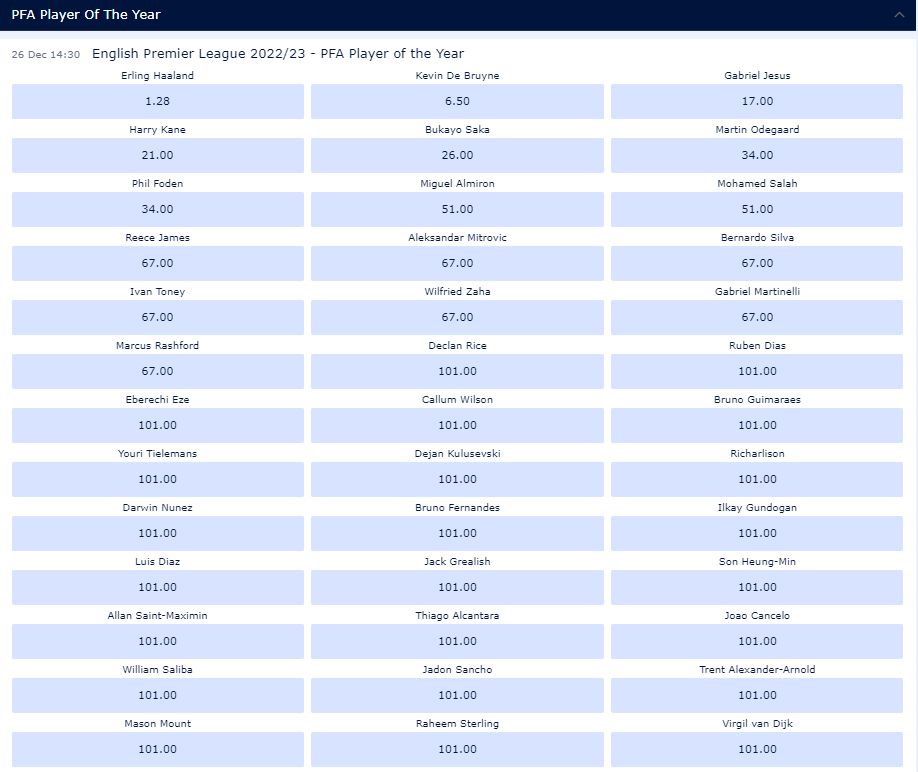 So Haaland is the absolute favourite and for good reason, but as it is clear, there is no real value in betting on him on such odds. If you want to place a bet on this particular market, your best choice would be to choose someone who you see as a dark horse to win the race and hope he has a monster season from this point on. Again, check the full PFA Player of the Year Award odds list to see if you can predict the player to win one of the most fought-after individual trophies in football.

What is the PFA Player of the Year Award

Very rarely have we seen the league’s top scorer take home the PFA Player of the Year Award. As for being a Champion, it also isn’t a necessity in order to be considered for the award. About half the winners came from teams that did not top the Premier League table when the season came to an end.

The Top Scorer Award is much less subjective than that of the best player. Firstly there is only one of them. And secondly, the rules are very simple. You put the ball in the back of the net more than your peers, you get the Golden Boot home. It doesn’t get any more straightforward. Haaland is, of course, the favourite to win that too. He is known to be injury-prone, but if he stays healthy not only will he win that award, and the European Golden Boot on top of that, but he could be the one to break the all-time record of 34 Premier League goals in a season, held by Newcastle United Andy Cole (1993-94) and Blackburn Rovers Alan Shearer (1994-95). Check the odds for the top scorer of the 2022-23 English Premier League.