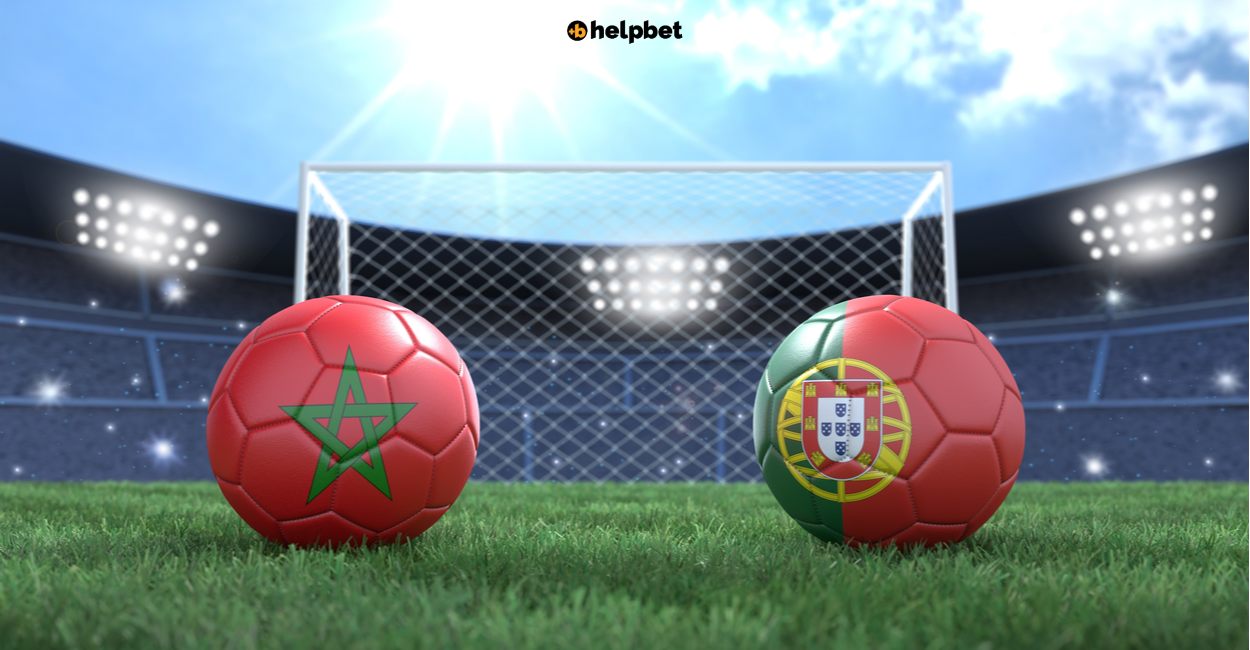 This is the weirdest out of the World Cup quarter-finals. A team that exceeded expectations just by bringing out the purest specimen of team spirit against one that has a legitimately scary roster, but what makes headlines is the antics of its biggest star. In other words, Morocco vs Portugal.

Morocco has already dealt with one of its irreconcilable neighbours, Spain. Now it is Portugal’s turn, almost two-and-a-half centuries after the Moroccan Reconquest and the Battle of Magazan.

The rivalry right now is purely a sporting one. It is the third time the two will meet in a World Cup match. In 1986, Morocco beat Portugal 3-1 in the group stage, while in 2018 Portugal got the win (1-0) behind a Cristiano Ronaldo goal, once again in the group stage. 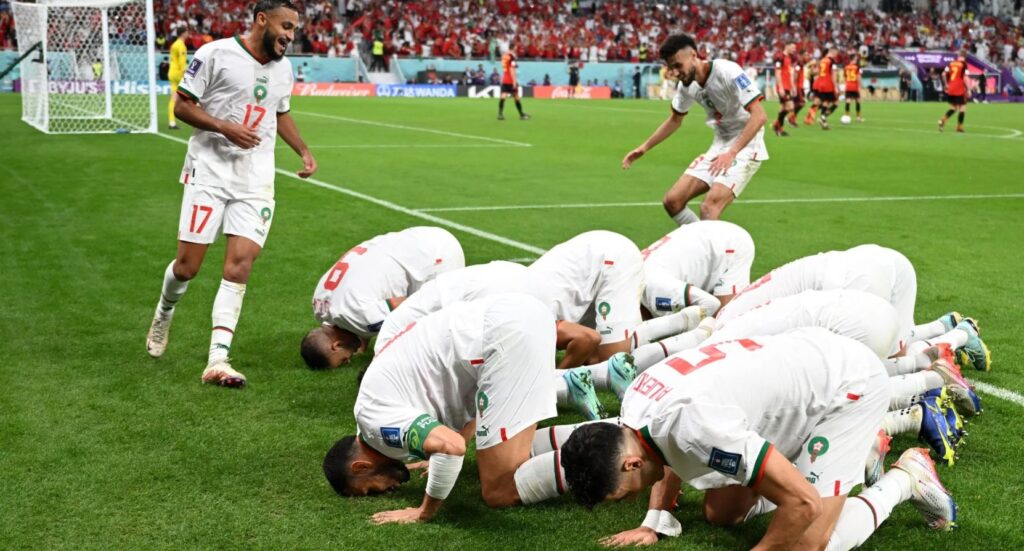 Morocco became the fourth African team to ever reach the World Cup quarter-finals. It also became the first representative of the Arab world to ever feature in this stage of the competition.

The Moroccans know they have a tough test in front of them. But what they can achieve is massive, as they are fighting to become just the third team ever not to come from Europe or South America to reach the World Cup semi-finals, after the USA in 1930 (when two wins meant qualification to the top four teams in the tournament) and South Korea in 2002. The latter has sparked a lot of controversy, as the co-hosts of that World Cup had some… help from the referees to beat Spain and Italy.

In a sense, Morocco is also playing at home. In a unique way, the Atlas Lions have united Africa and the Arab world behind them. And all has happened because of two key factors. First, you have the talent of this group. Many have stated that this is the most “European” out of all African teams that appeared in this World Cup. Not just because 14 out of the 26 players on the roster have grown up in Europe (4 grew up in Belgium, 4 in the Netherlands, 3 in Spain, 1 in Germany, 1 in Italy, and 1 in France, as did the team’s manager Hoalid Regragui). It is the way the team plays.

The roster is chock full of quality footballers who play for the biggest European clubs. Goalkeeper Yassine Bounou and starting striker Youssef En-Nesyri play for Sevilla. Full backs Achraf Hakimi and Noussair Mazraoui (in discussion for the best pair of wing backs in the competition) play for Paris Saint-Germain Bayern. Centre-backs Romain Saiss and Nayef Aguerd have a combined 20 seasons in the French Ligue 1 and the English Premier League. Midfielders Selim Amallah, Azzedine Ounahi, and Sofyal Amrabat had played for the youth national teams of Belgium, France, and the Netherlands respectively before choosing Morocco. And the two wingers, Hakim Ziyech and Sofiane Boufal, the most delicate players on this roster, have proven their worth in England for a long long time.

Things could have been different for Morocco. Vahid Halilhodzic was in charge of the team and he had alienated the team’s best player, Hakim ZIyech. When he was sacked, last August, his replacement reinstated Ziyech, who immediately took over as Morocco’s de facto leader and playmaker.

Portugal is on the verge of achieving something the team has only done twice in the past, reaching the World Cup semi-finals. Portugal has one of the most impressive rosters they have ever had, full of youth and immense talent, but unfortunately, it’s other issues that hog the attention of the press and public.

Cristiano Ronaldo might be one of the best footballers to have ever walked the earth, but the captain of the national team is making the news for all the wrong reasons.

Just as Portugal was about to play their first game in the tournament (while there were already rumours and whispers that many players on the Portugal roster were unhappy with their captain) Ronaldo decided to break his contract with Manchester United, making a whole story out of it. His interview with Piers Morgan was celebrated by his fans but mocked by critics.

And then the tournament started. Ronaldo has been mediocre so far. He scored a penalty in the opening game (and won the Man of the Match award, despite being rather unspectacular, especially in comparison to Bruno Fernandes). In the second game, he claimed to have scored a goal, celebrated like he did touch the ball and tried to take away Bruno’s goal. He demanded to start the third group stage match, when all other starters were rested, in order to hunt the top scorer award, but failed to find the net. When he was taken off, he swore in his coach’s direction.

But it all escalated when he was left out of the starting XI for the match against Switzerland. His replacement, Goncalo Ramos, scored a hat trick. Ronaldo refused to celebrate. When his team did win, he looked away when giving his hand to his manager, Fernando Santos, and didn’t join the team to celebrate in front of the fans. The following day, he refused to train with the backups.

Is it fair to Portugal to dedicate that much time to the Ronaldo controversy instead of the rest of the team? Probably not. But it’s the players themselves who seem to be fed up with Ronaldo’s antics.

And we are talking about a magnificent team, with players like Ruben Dias, Joao Cancelo, Bruno Fernandes, Joao Felix, and Rafael Leao.

Morocco stunned a lot of people by getting the top spot in their group against Croatia, Belgium and Canada. The Moroccans started things off with a 0-0 draw with Croatia, before beating Belgium (2-0) and Canada (2-1) to claim the top spot. In the round of 16 the Atlas Lions beat their other neighbours, Spain, on penalties.

Portugal beat Ghana 3-2 and Uruguay 2-0, before losing 2-1 to South Korea, to take first place in Group H. In the Round of 16, the Portuguese beat Switzerland 6-1, behind a hat trick by Goncalo Ramos.

Morocco’s starting XI has pretty much been the same, whenever possible. However there are some fitness issues in the Morocco camp. Central defenders Aguerd and Saiss didn’t on Thursday, after picking up knocks. Equally as doubtful is Sofyan Amrabat. Even if they are deemed even slightly fit to play, they will all take the pitch for the most important match in the history of Morocco at the World Cup.

Joao Cancelo missed the Switzerland match and Raphael Guerreiro was great in his place. So it is very possible that Fernando Santos goes for the same plan for this Morocco vs Portugal match. Pepe will probably continue partnering Ruben Dias in the centre of defence.

The biggest question is, of course, whether Cristiano Ronaldo will return to the Starting XI, or if he will continue on the bench. The latter is the most probable scenario, especially after Goncalo Ramos scored three goals in the game against Switzerland.

If Portugal manages to deal with all its off-the-field issues, then it does have the quality to win and win easily, for what it’s worth.