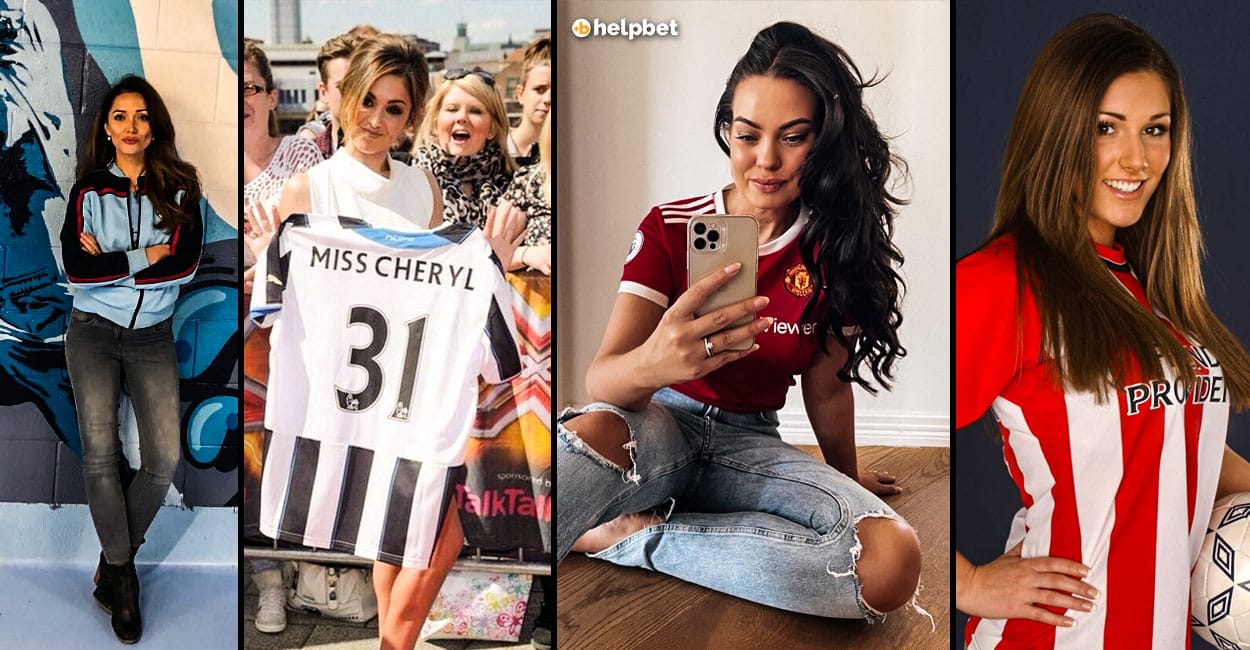 Football is beautiful and so are its fans. Well, not all of them, but at least there are some who are a pleasant sight during a boring rainy November midday 0-0 tie. With the Premier League 2022-23 season set to start in just a few weeks, we present you with the most stunning celebrity football fan of each Premier League club. Who is your team’s most beautiful supporter? Who is the one you wish supported your team instead? And did we miss anyone? Let us know in the comments below and don’t forget to log in to your free account to get points for the Helpbet tournament to win a Premier League shirt of your choice.

Arsenal have their fair share of hot celebrity football fans. But after seeing Rosario Dawson in that Gunners top, we just stopped looking around. A self-proclaimed Trekkie (yes, she does speak some Klingon), a human-rights activist, and a major Hollywood star, she is regularly tweeting during Arsenal matches, supporting her favourite team. And she is recently single. So, Arsenal fans, maybe it’s time to book a trip to New York, packing your Gabriel Jesus shirt. 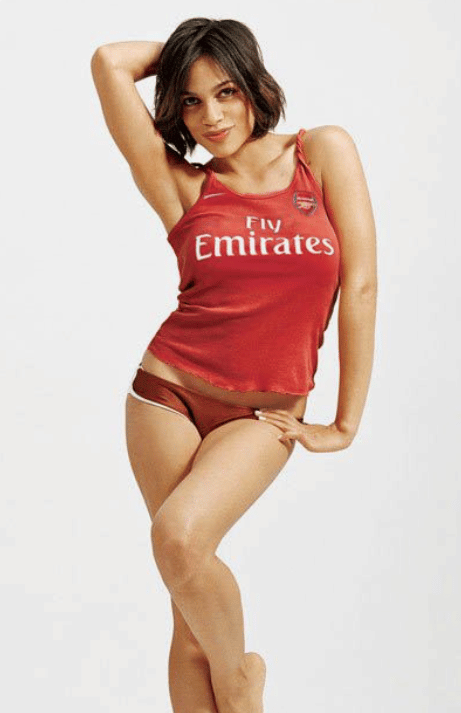 A Birmingham native, Emma Willis is an avid Aston Villa fan. The television presenter and former model, is vocal about her love of the club and has been spotted in Villa Park on multiple occasions. She is more beautiful than ever, at the age of 46, but one thing has to be said. Her eyes were, are, and will continue to be absolutely stunning.

You won’t find many women in their early 50’s looking the way Jayne Middlemiss does. A miner’s daughter for the North, she chose to root for Bournemouth (unknown why), which is perfect for both our list and the Cherries’ fans alike. A TV and radio presenter, she still maintains the physique she did during her modelling days. 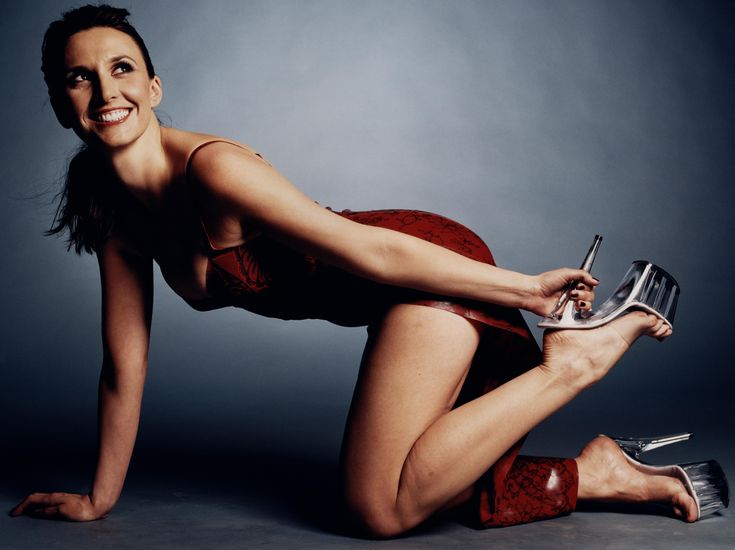 A Sky Sports News presenter for 18 years, Natalie Sawyer grew up in West London and first attended a Brentford match when she was 5. She was a child when Brentford played in the second tier of English football for the first time in six decades before the club was immediately relegated, so when the team reached the Championship in 2014, she celebrated on live TV. Now, she’ll see her beloved Bees play in the Premier League for the second year in a row, along with her son, Sawyer Matterface, who’s also a Brentford fan, and her boyfriend, former Brentford player Jonathan Douglas. 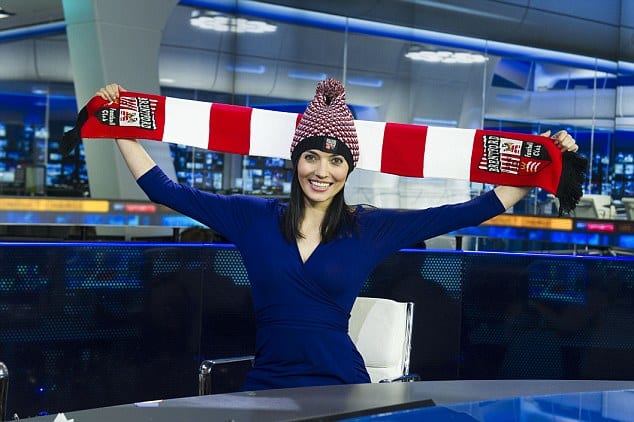 When Louise Nurding was voted Sexiest Woman on Earth in 1997, her then-boyfriend (and now ex-husband), Jamie Redknapp was a Liverpool star, pitched as the next best thing in football, before injuries derailed his career. Yet she always remained loyal to her beloved Brighton. Many thought that the shirt campaign in 1997 was just a paid promotion, but in 2018 she clarified, during the Brighton Pride, that she is indeed a lifelong Albion supporter. 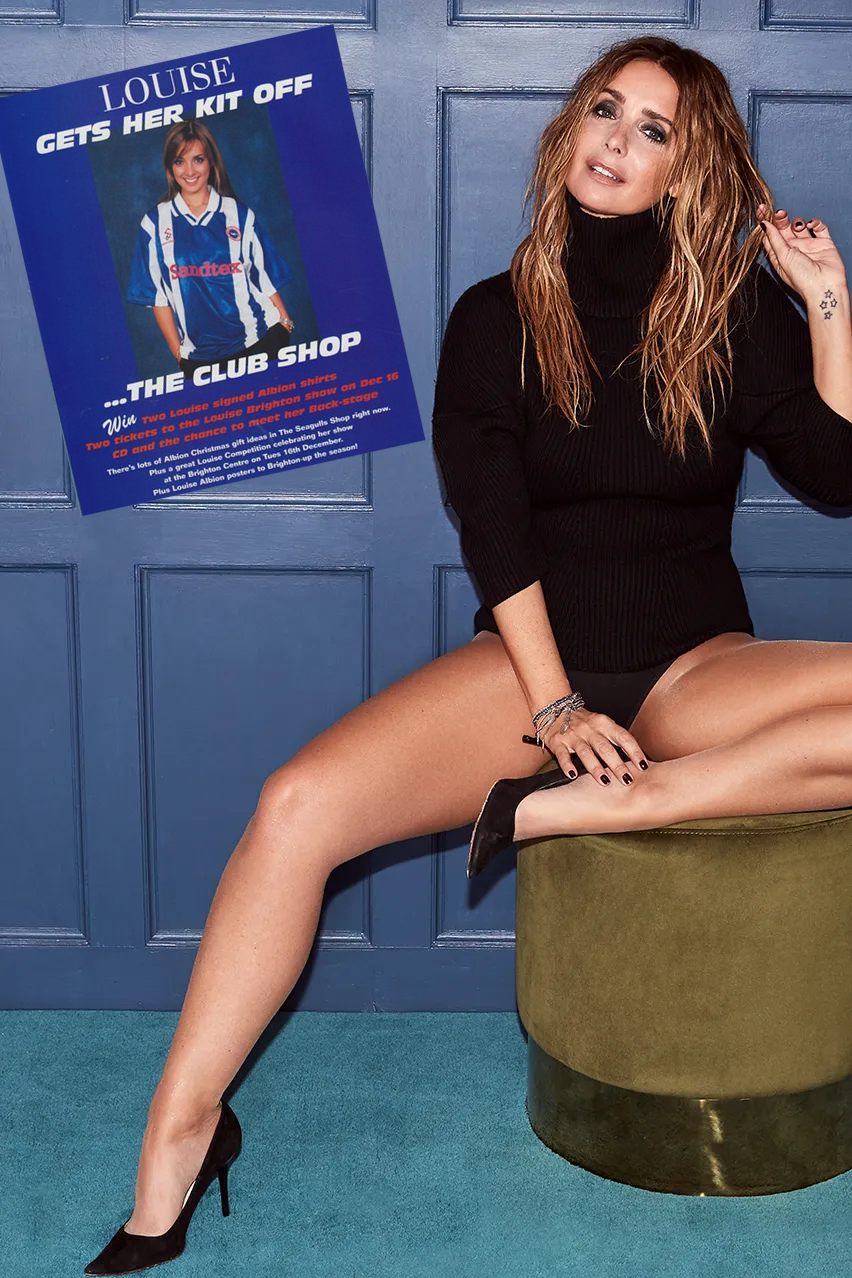 This was a close one. When you got a certain Charlize Theron supporting Chelsea, how can you pick anyone else? Still, she only became a Chelsea fan in 2012, while Sophie Rose grew up a Chelsea fan and about half her Instagram pictures are taken in or around Stanford Bridge. Yeah, we love loyalty here. 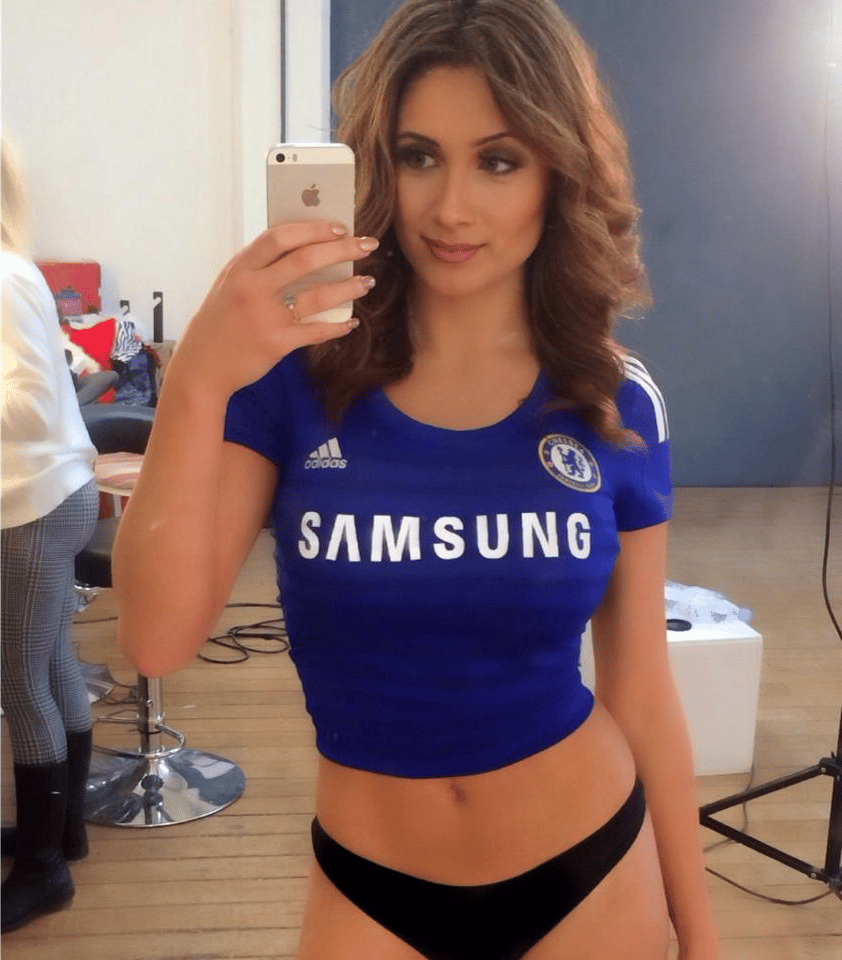 When your dad is English and your mom is Brazilian, then football runs in your veins. The TV presenter has visited more than 200 football grounds and also loves volleyball, UFC, the NFL, rugby and polo. She does have a soft spot for Manchester United, but Crystal Palace is her one true love. 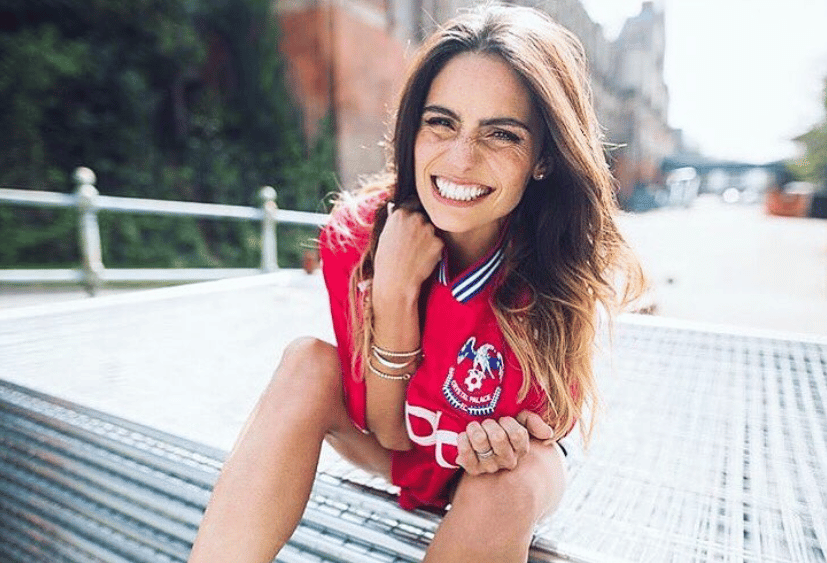 We’re really sorry Liz McClarnon, we really are. We can’t feature you both in our list, so we went with this vocal Evertonian. Amanda Holden isn’t just an actress and BGT judge (and a genuinely funny person). She’s also passionate about her team. She was even made an Everton ambassador in 2016 and regularly attends home and away games. Just visit her Instagram page or Twitter feed. It’s all blue, lads. 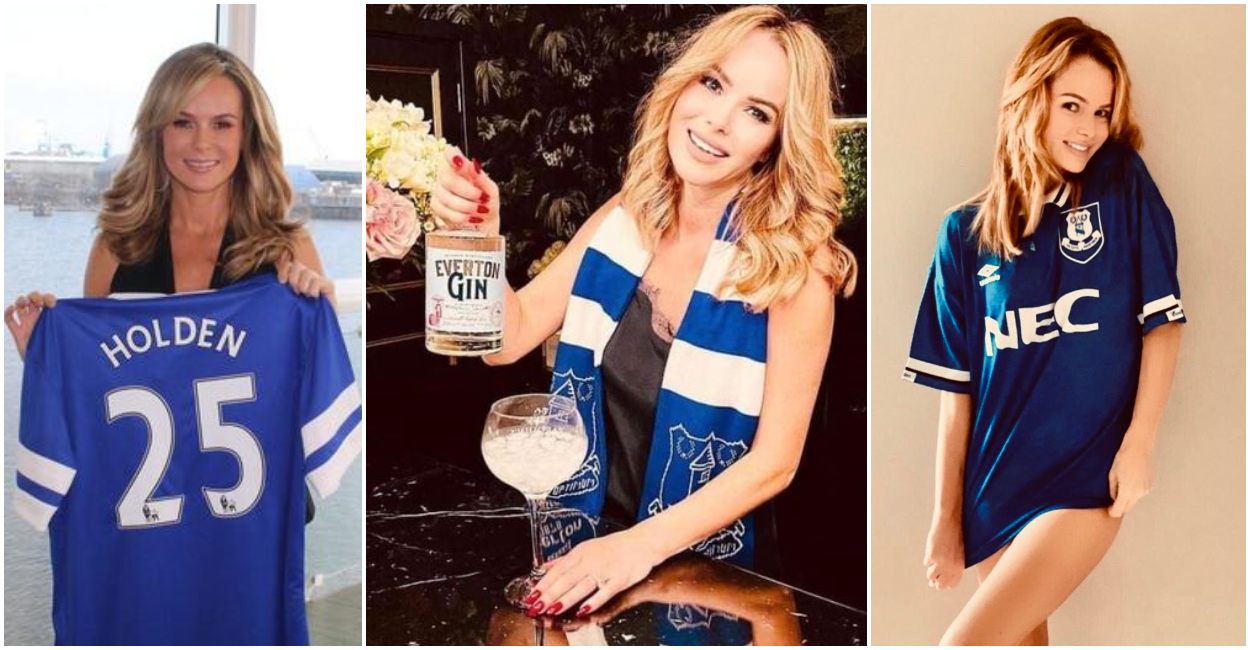 Margot Robbie is a Cottager by proxy, as the Australian actress got passed her husband’s fandom to her. Tom Ackerley is passionate about Fulham and Robbie started following the team when she met him. Still, even if she’s not the most passionate fan, you just can’t ignore one of the world’s most stunning women. 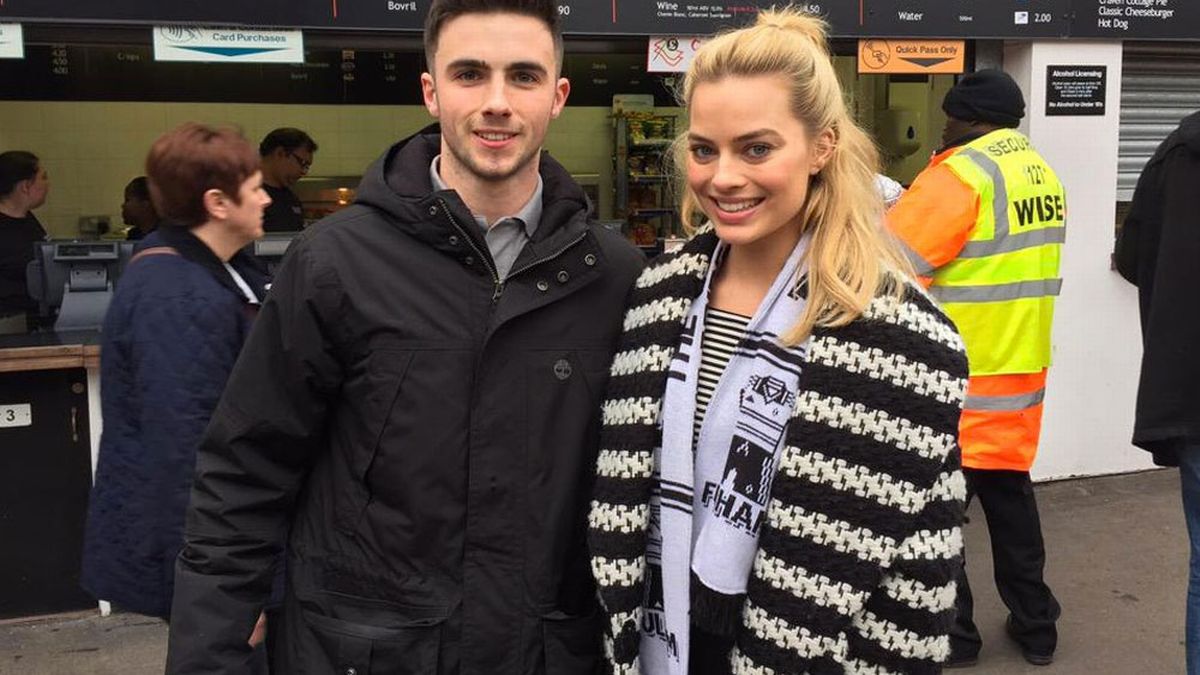 LUTV had a top-tier presenter even before the team returned to the Premier League. A stunning blond journalist cannot go unnoticed by men, especially when she hosts a TV show and she has an army of social media followers. It is unknown if she were a Leeds fan before landing the job, but she is passionate about the team today, that’s for sure. And we’re passionate about her. 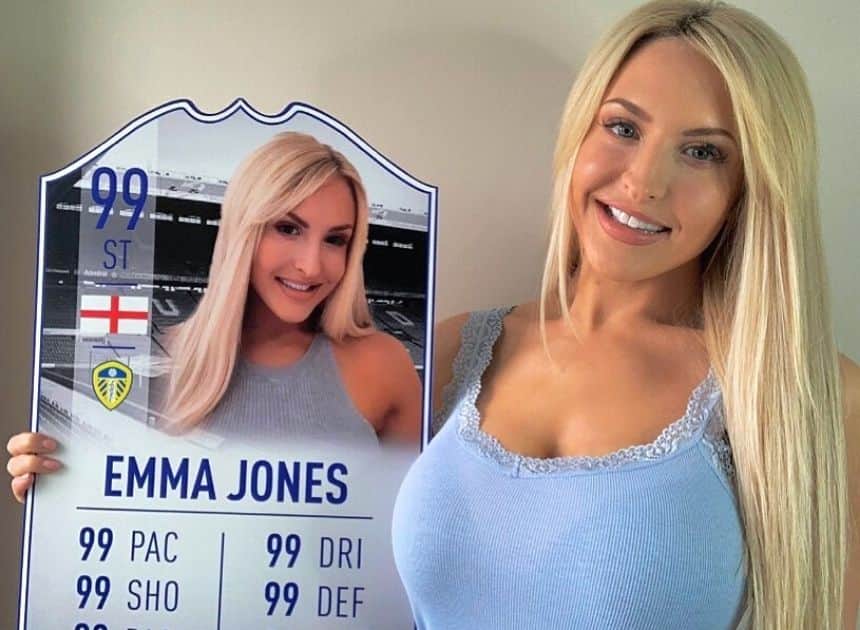 Twice have Leicester FC fans been voted as the sexiest in the land, but all club’s celebrity fans appear to be lads. The one who best fits the description is glamour model Megan Elliott. A season-ticket holder, she claims that the 2016 Leicester Miracle saved her life, as the team winning the League gave her the strength to overcome her eating disorder. 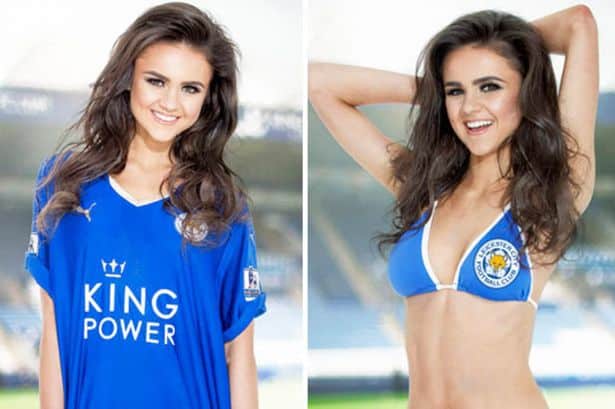 When your famous father has written and sang “Lady in Red”, it is fitting to be the most stunning Lady in Red in Anfield. Rosanna Davisson, former Miss World and Chris de Burgh’s daughter is a lifelong Liverpool fan and has worked in the past as a presenter for LFC TV.

Natalie Pike is known as the “Sexiest Football Super-Fan in Britain”. A famous underwear model, she is an avid Manchester City fan and has presented Match Day Live, the club’s match day programme, since 2011. And yeah, she has met every City player of the last decade! 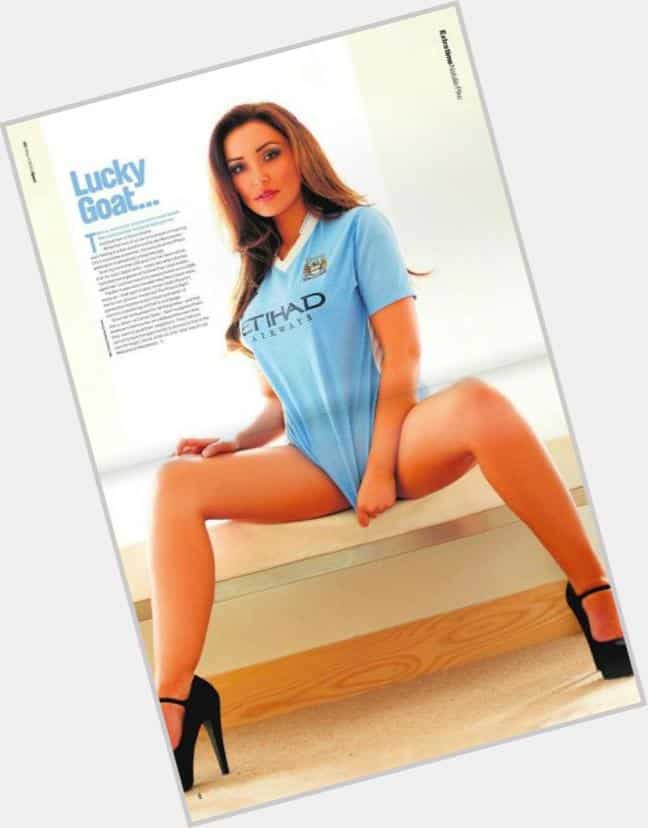 Manchester United is one of the most well-loved teams not only in England but internationally. There are numerous celebrity football fans who could take this place in our list, but we chose to go with Norwegian Instagram star Ann Mari Olsen. She must be livid for her compatriot, Erling Haaland, having joined bitter rivals City. 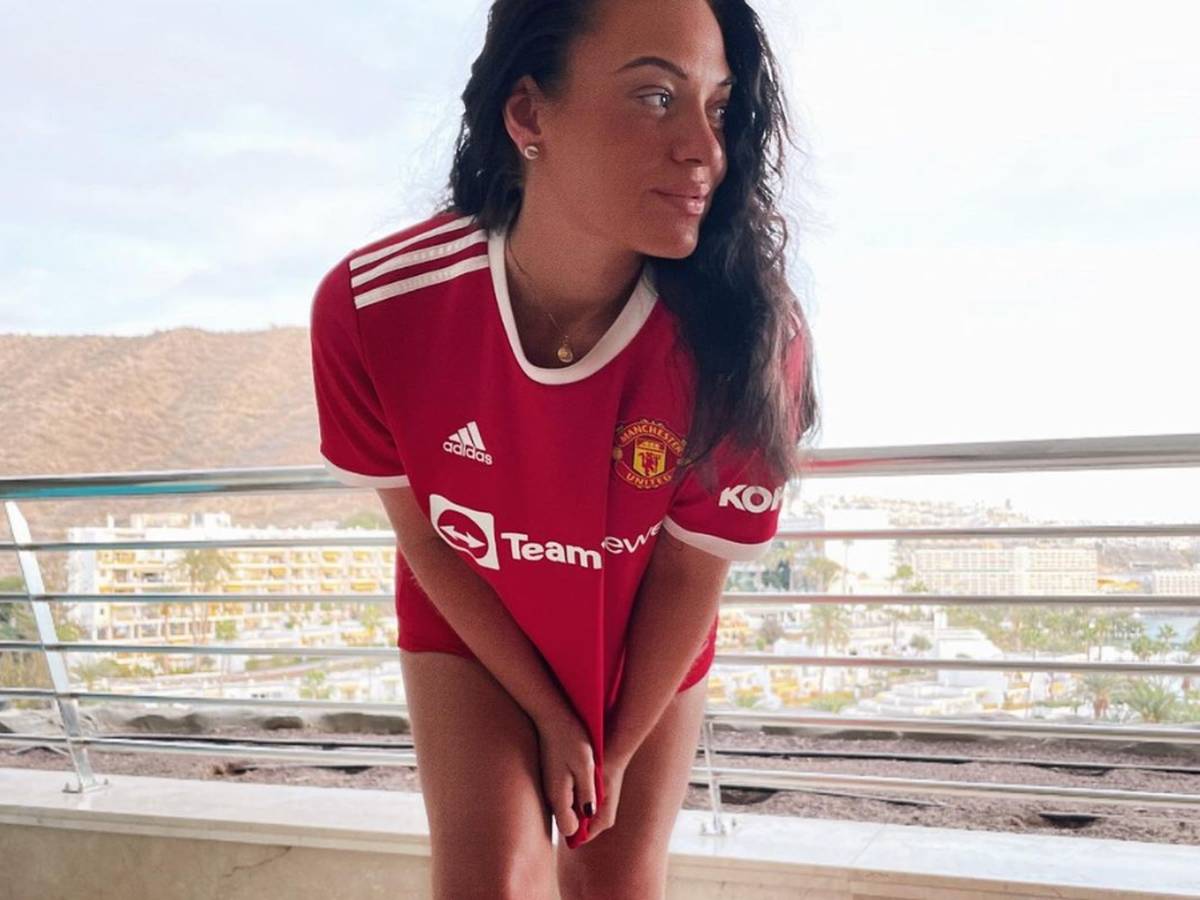 Most of us still call this fair lady Cheryl Cole. Her ex-husband is a Chelsea legend, but she never forgot her local club, Newcastle United. Cheryl has modelled for the club’s e-shop in the past. 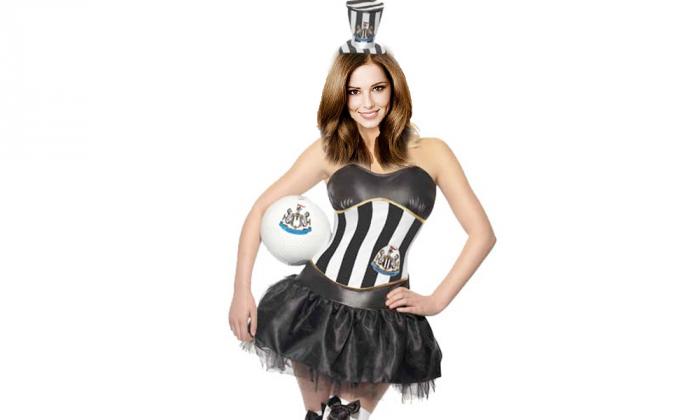 Vicky McClure is a strange cookie. She has a soft spot for both her hometown clubs. It’s not all that common to have someone supporting both Nottingham Forest and Notts County, but this is Vicky McClure. There is that one picture from her teenage years, wearing a County shirt, but being married to Forrest’s director, Jonny Owen, she is a regular at City Ground and she was seen celebrating the promotion at Wembley. 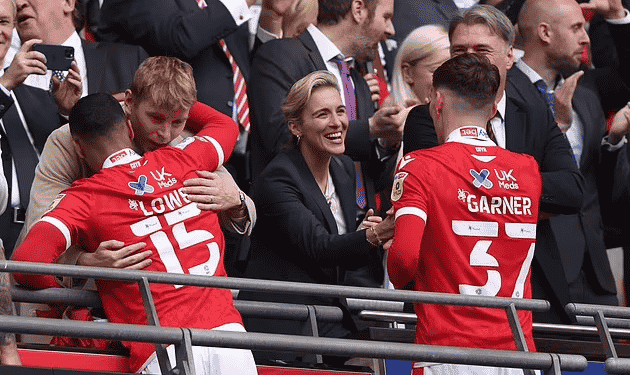 Hampshire native Lucy Pinder is probably one of the most avid Southampton fans out there, celebrity or not. An actress and former glamour model, she has appeared in multiple “World’s Sexiest” lists, which makes us forgive her for some of her movies, such as Sharknado 5. 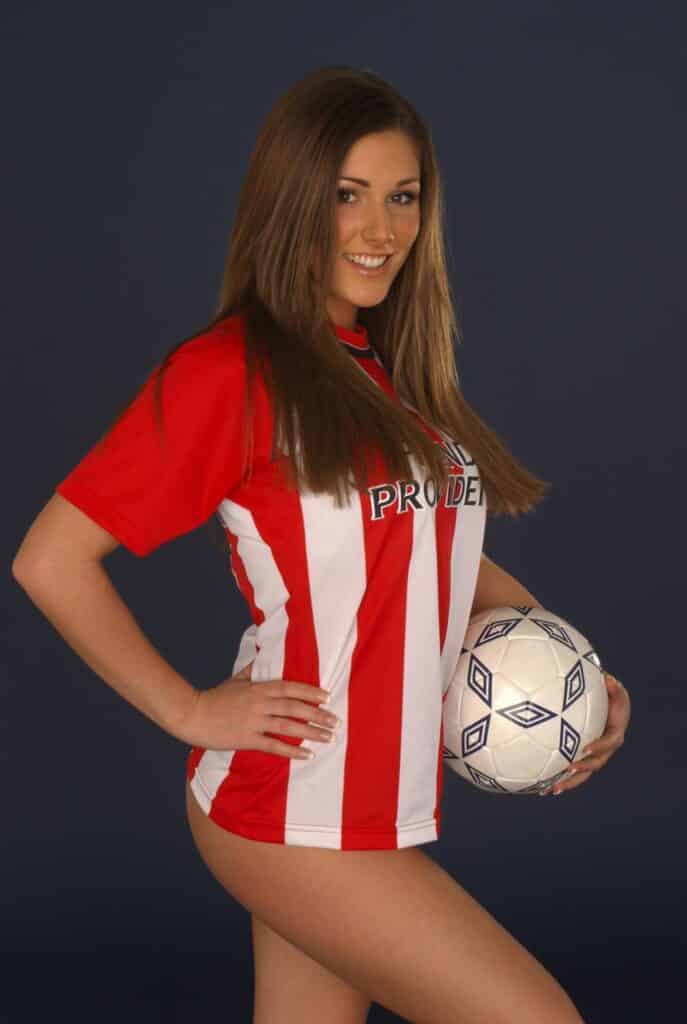 If you want Cher Lloyd to reply to your tweet, ask her something about Tottenham. In fact, Spurs were one of the connection points with her husband, hairdresser Craig Monk. The 29-year-old singer got the Spurs “bug” from her father and proudly carries it to this day. 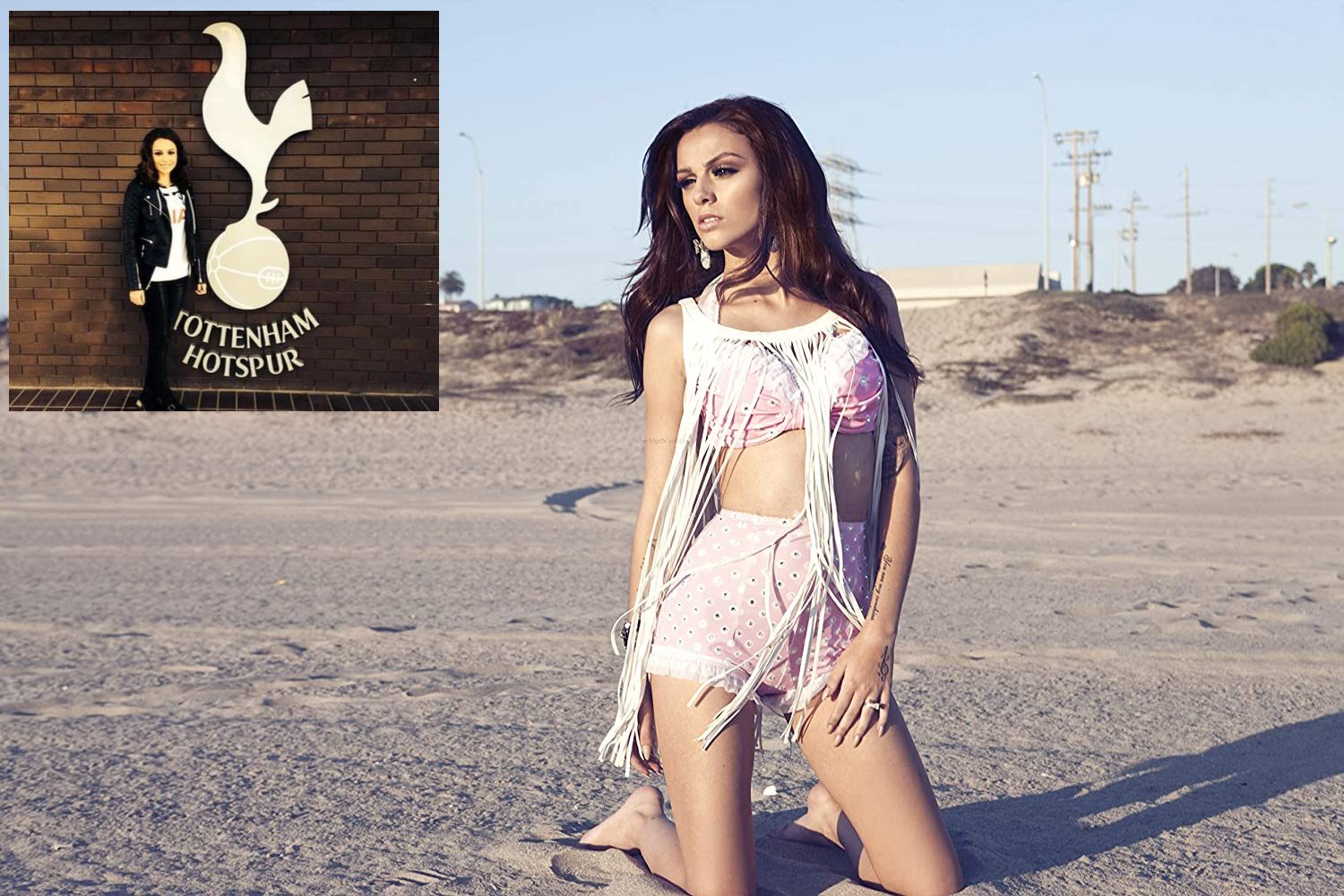 There are not many pictures more famous than this Katy Petty West Ham corset photo. The American singer was introduced to the beautiful game by her ex-husband, WHU super fan Rusell Brand. Their divorce was pretty ugly, but she continued to support the team, even after the pair split up. 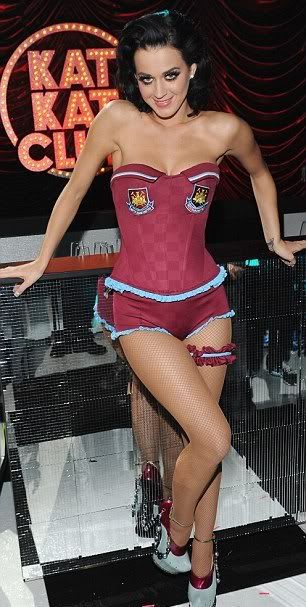 Mexican model, sports reporter, and former athlete (she has won Mexican championships in both handball and basketball) is a Wolves fan. We couldn’t find what the connection is and how she got hooked, but the Latin appeal of the club is pretty big in the past few years. 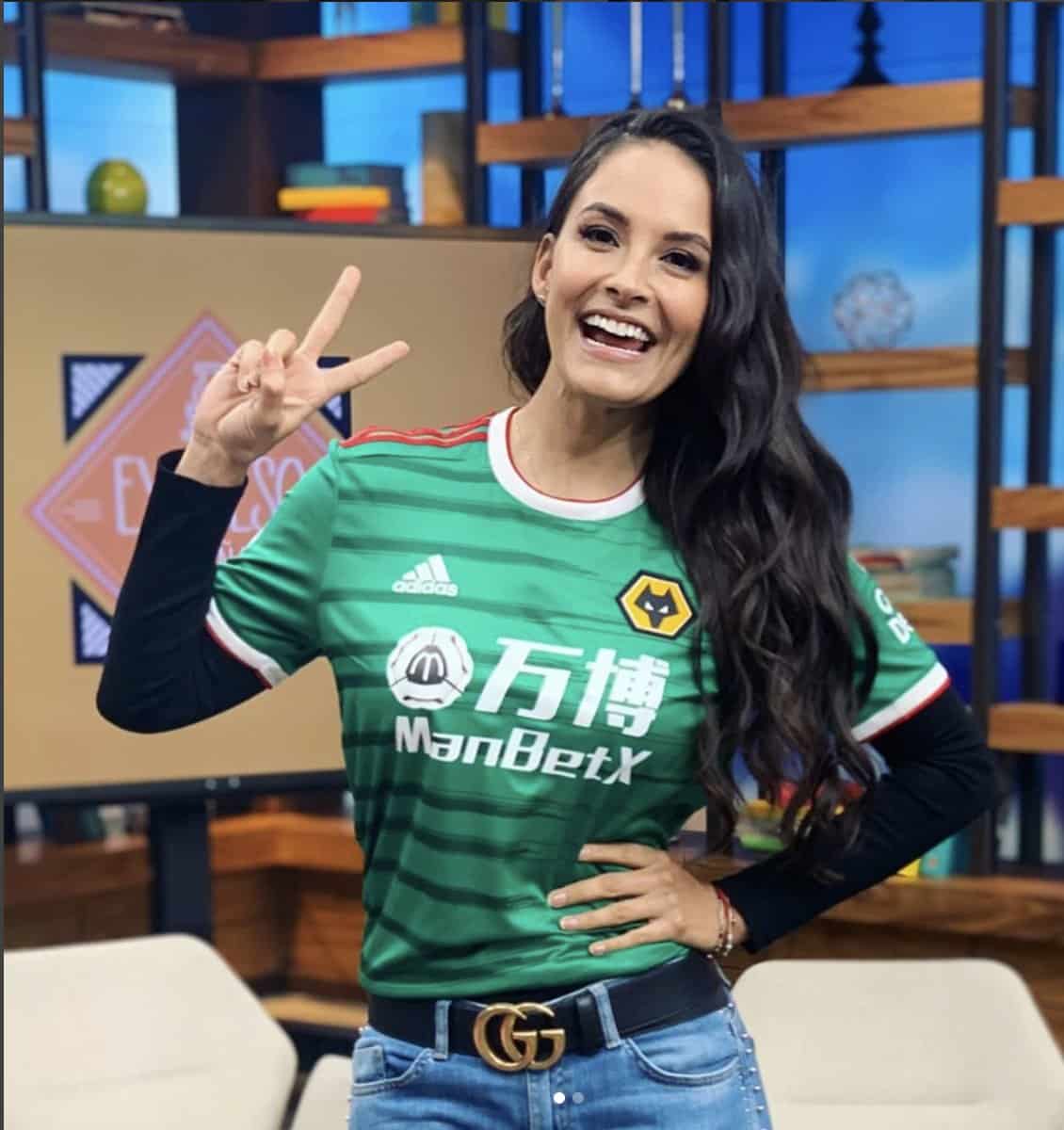