The 23 Most Beautiful Sports Presenters in the World for 2023 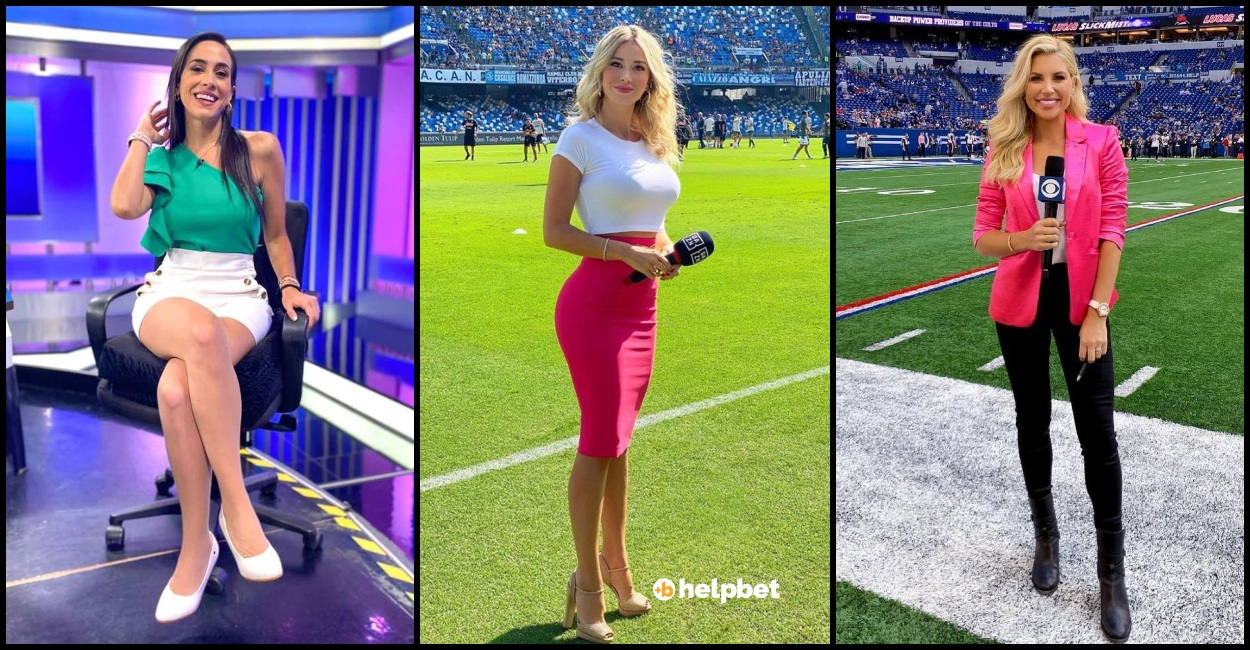 The world of sports and in particular the world of sports journalism is man-dominated. But there are those ladies who manage to leave their mark. Since 2023 is here, we bring you the 23 most beautiful sports presenters in the world. But they’re not only gorgeous, they are extremely talented.

The Most Beautiful Sports Presenters and Reporters

So here they come. The 23 Most Beautiful Sports Presenters for 2023

From Bundesliga courtside reporting to her very own football show, and from hosting the German Ninja Warrior series (we do consider it a sport, this is some tough stuff) to presenting the Top Dog Germany show, Laura Wontorra is a multi-talented lady. She is the daughter of sports writer Jorg Wontorra and she was married to Bochum’s striker Simon Zoller. The couple separated earlier in 2022. She is 33 years old and a Werber Bremen supporter.

It wouldn’t be accurate to call Minnie Dlamini a sports presenter. At least not exclusively. She is an actress, model, and reality TV star, who happens to like sports, so she ran he own sports show, “Homegrown” for nearly five years. She was married to Quinton Jones, but the pair filed for divorce in early 2022. She is 32 years old.

Daughter of a professional golfer (nothing more Scottish than that) Kirsty Gallagher always knew she would become a sports analyst. She has worked for Sky Sports for almost twenty years (split into two stints), BBC, and GB News. From 2010 to 2015 she was married to rugby player Paul Sampson, with whom she has two sons. She is 46 (wow, she looks great) and is an avid supporter of Hibernian FC.

Born in Canberra, Australia, and raised in Jakarta, Indonesia, Erin Molan attended 16 different schools, as she had to regularly move with her parents, with her father being a major general in the Australian Army (and later a politician, although that did not require too much moving). She worked for Nine Network as part of The Footy Show for more than a decade, but since 2021 she is part of Sky News Australia’s roster. She is 38 years old, has a 4-year-old daughter and is divorced. She is a Liverpool supporter.

Marisol was Miss Mexico in 2002 and competed in the Miss Universe pageant the next year. Just a few years later she started a career as a sports reporter and a telenovela actress. She is married to former footballer Rafael Marquez Lugo, with whom she has two children. She was previously engaged to multiple boxing world champion Canelo Alvarez. Marisol Gonzalez is 39 years old.

At 40 years old Charissa Thompson looks better than ever. A Seattle native, she is considered to be one of the leading NFL analysts, regardless of gender, and after a lengthy career with ESPN, she now works for Fox Sports and Amazon Prime as the presenter of Thursday Night Football. She was married to sports agent Kyle Thousand (who rose to fame as Alex Rodriguez’s agent), but the couple divorced earlier in 2022. She has previously dated former Chicago Bull Jay Williams. She was a Seattle Seahawks fan but now claims to have no strong affinity with any team, due to her profession.

Born and raised in Pau to Basque parents, Isabelle Ithurburu was elected Miss Pau-Bearn when she was 18. She pursued a career as a singer but her love for rugby led her to become a sports journalist. She has been working for Canal+ Sport for 13 years. She is 39 years old and a supporter of her hometown rugby team, Section Paloise. She actually met her husband, Argentinian former rugby player “Speedy” Gonzalo Quesada, when he was playing for her favourite club.

Sara Carbonero rose to fame during the 2010 World Cup. Spain won the title and La Roja’s captain, Iker Casillas, made their relationship public by kissing her on camera, during the flash interview. They are separated since 2021, but they have two sons together. She is 38 years old and has worked as a sports writer and reporter for more than 15 years.

The daughter of a cricketer, Zainab Abbas grew up loving the most popular sport in Pakistan. She worked for years as a makeup artist, but in 2015 she auditioned to appear on a Cricket World Cup show, which launched her career as a cricket commentator. In 2019 she won the Sports TV Host of the Year award and in 2020 she was included in the most influential people in Asia list by the New York Press Agency. She is 34 years old and she is married to Hamza Kardar, who, like her, has a cricketer father and a politician mother.

One of the younglings on this list is Caren Kibbett. Aged 26, she has worked as a sports news anchor for K24 and the KBC in Kenya. As of 2022, she has hinted she is single.

Our second entry from Mexico comes in the form of Jimena Sanchez. At a young age, she started a modelling blog and she always gave a football context to her articles. So pretty soon she got the attention of sports publications. She has worked for Fox Sports for years now, covering from baseball to American football and from basketball to pro wrestling. She is 38 years old, married to songwriter Tis Zombie, and an avid fan of Chivas Guadalajara and the Las Vegas Raiders.

Melanie Collins is one of the most prominent sideline reporters in the NFL but also covers NBA and football events. She actually started her broadcasting career with a weather channel, but her love of sports shifted her path. She is 36 years old and in a relationship with hockey player James Neal.

Giorgia Rossi was 7 years old when her grandfather Mario took her to an AS Roma football match. She instantly became hooked and is now one of the best-known football journalists in Italy. She abandoned her law studies when she won an audition to work for Roma’s thematic channel. From then on she moved first to Sky Italia and then to Rai Sport. Since 2013 she worked at Mediaset, but in 2021 she joined DAZN and hosts a Serie A show, as well as UEFA competition pre-match and post-match shows.

Sukran Albayrak played basketball for Fenerbance and the Turkish national team, winning four league titles in the process. She had to retire at the age of 24 (having played 93 international matches for Turkey) and then took on sports science studies. She is now co-presenting Sport Center on beIN sport. She is 40 years old and holds both a basketball and a golf coaching licence.

Katarina Sreckovic is apparently so impressive that a Red Star Belgrade coach banned her from the sidelines in order for his players not to be distracted. The 39-year-old, mom of one, works for Zvezda TV, the official channel of the club, covering both football and basketball matches.

If the name is familiar is because Natalie Pike also featured on our list of the most attractive Premier League fans. An avid Manchester City supporter, Pike worked as a presenter for the club’s in-house media team. For the past two years, she hosts Talking Balls, a BBC Radio football show. She is 39 years old and has a young son.

Well, this is a bit of cheating. Jhen Nunez is not really a sports presenter. She is an Instagram model, but she worked for Chile’s Channel 13 and Fox Sports as a sports presenter for nearly three years, before moving back to her previous career. Her most notorious moment was back in 2014, when Alexis Sanchez scored against Brazil in the World Cup. Jhen Nunez lifted her shirt on camera to unveil a bra in the colours of the Chilean flag. Chile ended up losing on penalties, so…

Michelle Lee is so much more than just a pretty face. She is one of the best-known sports presenters in Malaysia and her knowledge of football (especially her beloved Premier League) can put so many lads into shame. At the tender age of 30, she is incredibly accomplished and the future shines bright in front of her.

Are you kidding us? Is she 40? What do Colombian women drink to stay so young? Andrea Calle grew up loving combat sports but her first career was in finance, before moving to modelling and broadcasting.

The second former pro basketball player. Her father was a footballer, but she devoted herself to basketball. She retired at the age of 29, as her academic studies won her over. She was the first woman in Greece to be the leading caster at a basketball game and she is one of the faces of Euroleague TV, performing courtside flash interviews. She is 35 years old.

Her infectious smile is becoming the hallmark of ESPN in South America. At age 27 she already has six years of experience as a football presenter. Many people were taken by surprise when she was chosen to host the famous Futbol en America show, but she won everyone over, not only because of her looks, but mainly because of her deep knowledge of the sport.

Born and raised in Catania, Diletta Leotta got involved with football broadcasting from the age of 17, when she started working with Antenna Sicilia. She had to drop the gig, as she moved to Rome to study, but there she immediately looked for another TV role. Since 2018 she hosts the DAZN Sports pre-match and post-game shows for the Italian Serie A. She is 31 years old and in a relationship with model Giacomo Cavalli.

And it’s time for our number one. Any of the ladies on this list could have claimed top spot, but there is something weirdly magical about Eva Murati. A former child actress, Eva left her hometown of Elbasan when she finished school to pursue a career in TV broadcasting. An animal rights activist and an avid feminist, 26-year-old Eva Murati is a huge supporter of Juventus. She is nicknamed the “Italian Monica Belucci”. Yes, we can see the resemblance.