World Cup Golden Ball – Who will win it? 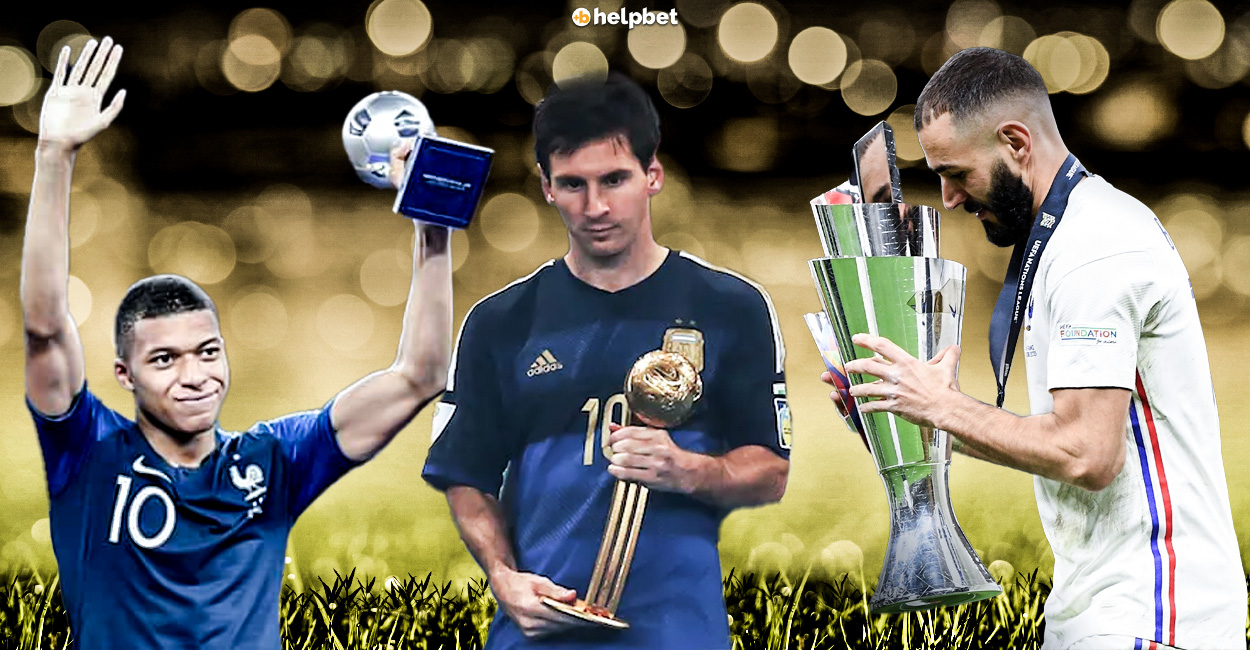 The most important piece of silverware in the World Cup is the actual trophy itself. As for individual awards, nothing beats the World Cup Golden Ball. Since its inception, in 1982, the award has been handed to ten players, only three of which paired it with a gold medal. Who will be the winner this year? Will the trend continue?

Helpbet.com brings you the odds and a brief history of the World Cup Golden Ball.

France is not the favourite to win the World Cup (that distinction goes to Brazil) but it is actually two Frenchmen who top the odds for the Golden Ball. Kylian Mbappe is having an amazing season with Paris Saint-Germain. He has scored 18 goals and handed out 2 assists in 19 games with his team, scoring every 89 minutes of play.

Mbappe turns 23 two days after the World Cup final. His offensive partner, Karim Benzema turns 35 one day after the final. Will the old guard outplay the young cub? The Balon D’ Or winner has had a series of minor injuries this season, but he has still scored 6 goals and given one assist in 12 matches.

The picture of a gutted Lionel Messi winning the World Cup Golden Ball in 2014 is heart-breaking. He led Argentina to the final, he was an absolute beast, but he couldn’t lift the trophy. He doesn’t care about the Golden Ball. But he needs to be the best version of himself for Argentina to have any chance of triumphing. Messi couldn’t be in better shape. He has played 18 games with Paris Saint-Germain this season, scoring 12 goals and giving 14 assists. This means he has a goal contribution every 60 minutes of play.

Three PSG players in the top favourites to win the Golden Ball at the World Cup. Neymar is Brazil’s leader and his team is the favourite to lift the trophy. Will he do what Romario did in 1994, when he became the third and last player to win both the World Cup gold medal and the Golden Ball at the same tournament? This season he has 15 goals and 12 assists in 19 minutes for one goal contribution every 57 minutes.

Kevin De Bruyne is arguably the best playmaker in World Football. But while he is better than ever, the rest of Belgium’s Golden Generation have regressed. Will he be able to guide his team at least to the semi-finals in order to have a legitimate chance of winning the World Cup Golden Ball? So far this season, he has been stellar for Manchester City. He has formed a formidable duo with Erling Haaland. In 18 games for the Blues this season, he has 3 goals and 13 assists.

One of the deadliest strikers in world football has never won a trophy in his career. As he approaches his 30th birthday, he wants to win something (and the World Cup with England is more than just something). In 20 outings with Spurs in the 2022-23 season he has netted 12 goals and given 3 assists.

With Karim Benzema dealing with injuries, Vini Jr. has been Real Madrid’s best player this season. The 22-year-old forward has 10 goals and 5 assists in 20 matches. He has played 98% of available minutes in La Liga and seems tireless.

Ronaldo claims he wants to continue playing for as long as it is possible, but this is probably his last World Cup. He is not in the best form, but his Portugal self is totally different than the one he shows when playing for Manchester United.

This was Rossi’s World Cup. He was the tournament’s best player and top scorer, netting 6, all after the first group stage. His Italy won the cup.

Maradona’s 1986 World Cup is legendary. He was the number one reason for Argentina winning the trophy and this tournament is what haunts Lionel Messi’s legacy.

Italy won the bronze medal in 1990, but Schillaci was voted as the tournament’s best player. In all actuality, Silver Ball winner Lothar Mattaeus (who lifted the cup as Germany’s captain) and Bronze Ball winner Diego Maradona were probably better throughout the tournament.

It was the tournament of three legends. Romario, Baggio, and Stoichkov were phenomenal. Romario won both gold medal and the World Cup Golden Ball for 1994.

Ronaldo shouldn’t have played in that final after the seizure he had. He was terrible in the final match of the tournament, which was won by host nation France, but in general we deserved the award, as he was a real phenomenon. France’s best player was Bronze Ball winner Lilian Thuram.

Just like Ronaldo in 1998, German goalkeeper Oliver Kahn was bad in the final, but he was the key reason for his team getting there in the first place. Ronaldo was given the Silver Ball this time, but he won the trophy and that is more important.

The trend continues. Zinedine Zidane was the best player in the tournament, but in the Final, he let his teammates down. He got sent off for headbutting Materazzi, something that either adds or subtracts from his legacy, depending on whom you ask. Fabio Cannavaro, who lifted the trophy as Italy’s captain, won the Silver Ball and the Balon d’ Or at the end of the year.

His Uruguay came fourth, but Diego Forlan was, by all means, the tournament’s best player. From the winners, Spain, David Villa was the one who was awarded the Bronze Ball.

Lionel Messi won the World Cup Golden Ball in 2014, as we carried a mediocre Argentina to the Final, losing in extra time. From World Champions Germany, Thomas Mueller was awarded the Silver Ball.

In 2018 Luka Modric won the Champions League with Real Madrid, led Croatia to the World Cup final, got the Golden Ball of the tournament, and eventually won the Balon D’ Or. France were the World Champions, with Antoine Griezmann winning the Bronze Ball too.