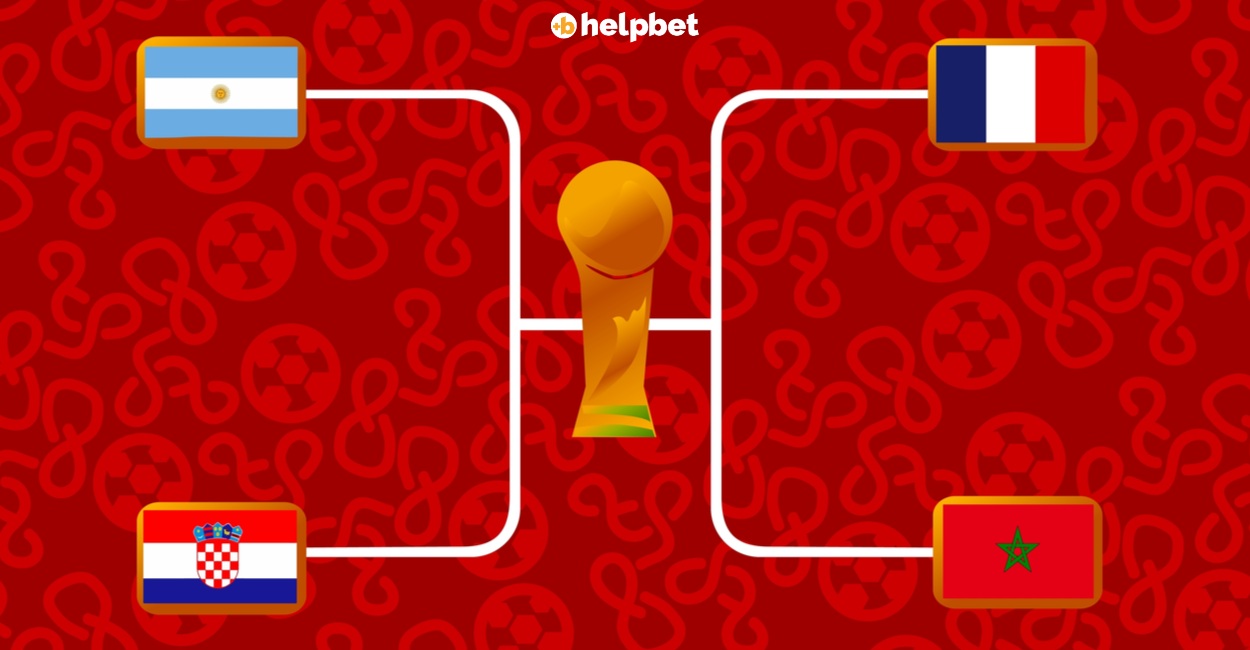 And we’re off to the semi-finals! The next Champion of the World will be crowned at the Lusail Iconic Stadium on the 18th of December and four countries are dreaming of the most significant moment. Along with them, football fans and bettors from around the world are studying the World Cup odds and are trying to figure out who will go back home victorious.

Let’s meet the four semi-finalists of the 2022 World Cup. What makes them special and what do the World Cup Odds say about their chances of winning the trophy in the grand final on the 18th of December in Qatar?

Valued at 2.10, France is the favourite to win it all, according to the best football betting sites. A few hours before the tournament started, France was the second favourite (along with Argentina and behind Brazil), valued at 7.50. After the Brazilians were knocked off and since Argentina theoretically has a more challenging opponent in the semi-finals, France is now first on the World Cup odds list.

France is steadily conceding one goal per game in this tournament, but the 11 goals scored by the French is the highest tally out of the four teams remaining. All players used by Didier Deschamps have performed incredibly, but the four pillars are obvious: Kylian Mbappe, Olivier Giroud, Antoine Griezmann, and the absolute X-Factor of this team, Adrien Rabiot.

France reached the World Cup semi-finals for the seventh time ever and now the team will try to perform the greatest trick of them all. A back-to-back World Cup win, something only done by Italy (1934 & 1938) and Brazil (1958 & 1962). If they pull it off, we will be talking about one of the greatest teams ever assembled.

Argentina was a joint-second favourite before the tournament started. Now offered at 2.65 on the World Cup odds lists, the Albiceleste is fighting for something the whole nation has been waiting for nearly four decades.

It was June of 1986 when the most beloved player the Argentinian football has ever seen, Diego Armando Maradona, won the World Cup, Argentina’s second, in Mexico City. Since then, a lengthy drought has been going on. And since 1994, Argentina tries to find the next Maradona, the new Messiah. That wasn’t Riquelme, that wasn’t Aimar, that wasn’t Gallardo, that wasn’t Ortega. That might be Messi, though. He has an argument for already being the best of all time and he wants a World Cup title to solidify that.

He isn’t alone in that quest. Emiliano Martinez, Nicolas Otamendi, Enzo Fernandez, Rodrigo De Paul, Angel Di Maria, and Julian Alvarez have all been splendid in this World Cup run. And he has already lifted one curse. In his career, he had three lost Copa America finals and one lost World Cup final. He has now won the Copa America and he did it in style, defeating Brazil in the legendary Maracana. Now he wants to defy the World Cup odds and lead his Argentina to the country’s third ever World Championship.

A few hours before the World Cup kicked off, Croatia was offered at 56.00 to win the trophy in Qatar. The World Cup odds never bothered the Croatians, who are now offered at 9.00,

It is amazing what Croatian football has achieved since the country gained independence from Yugoslavia, in the mid-1990s. The Croatians have qualified for six about of the seven World Cups and reached the semi-finals three times. A bronze medal in 1998 and a silver one in 2018 means that the Checkered Ones need not worry about what the World Cup odds say.

The amount of talent this country of fewer than 4 million people has produced is incredible. What is even more incredible is that the two heroes of this Croatia team, Luka Modric and Dominik Livakovic, come from the same city, Zadar, home to fewer than 100 thousand people. Zadar is also the hometown of Sime Vraljko and Danijel Subasic. Just like Livakovic in this tournament, Subasic was the hero of the previous one, when he saved three penalties during the penalty shootout against Denmark.

There is no clearer way of describing how amazing what Morocco has done is, than just displaying the World Cup odds before the start of the tournament and now. On the 20th of November, Morocco was offered at 201.00. Now it might still be the underdog between the four semi-finalists, but World Cup odds of 10.00 are not that bad, are they?

Morocco has united two worlds behind it, as it became both the first Arab country and the first African country to feature in the semi-finals of a World Cup. And the Moroccans must feel like playing at home, as the crowd in Qatar certainly backs them and they do it vocally.

It is by far the most disciplined team in this World Cup. Morocco has just conceded one goal in this run. In fact no opposing player has scored against Morocco since Hoalid Regragui took over as the team’s head coach in August. The only goal put past Yassine Bounou was an own goal by Nayef Agued in the Group Stage match against Canada.

Let’s see what the World Cup odds have to say about the Golden Show race. Kylian Mbappe leads the chart with 5 goals, followed by Lionel Messi and Olivier Giroud, who each have 4 to their names. In the past two tournaments, the winner ended up with 6 goals (Harry Kane in 2018 and James Rodriguez in 2014), while in 2010 four players ended up having 5 goals, with Thomas Muller getting the Golden Shoe award, having played the least minutes.

The top scorer picture, entering is semi-finals is as followed:

Click on the table below to see the full World Cup Odds for the top goalscorer. 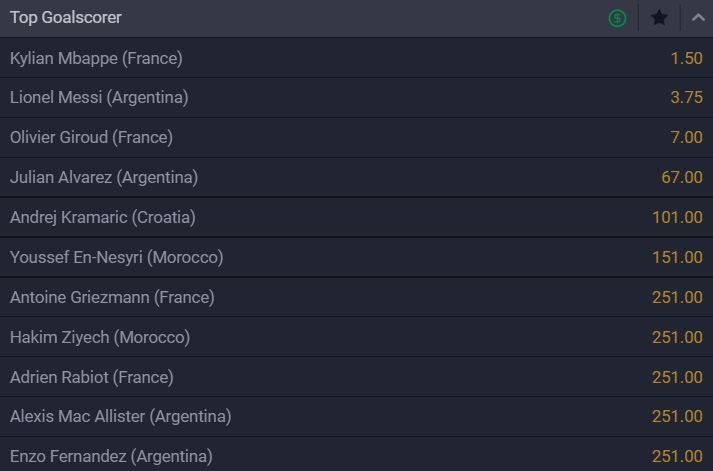 The most prestigious of the World Cup individual awards is the one for the best player of the tournament. But do you really want to win it? Since 1982, when the award was first introduced, it was given to a member of the winning team only three times, the last being Romario in 1994. Five times has it been won by a player of the defeated finalists and twice it was awarded to a player whose team didn’t even reach the final.

Check the World Cup odds for the Golden Ball winner by clicking on the following table. 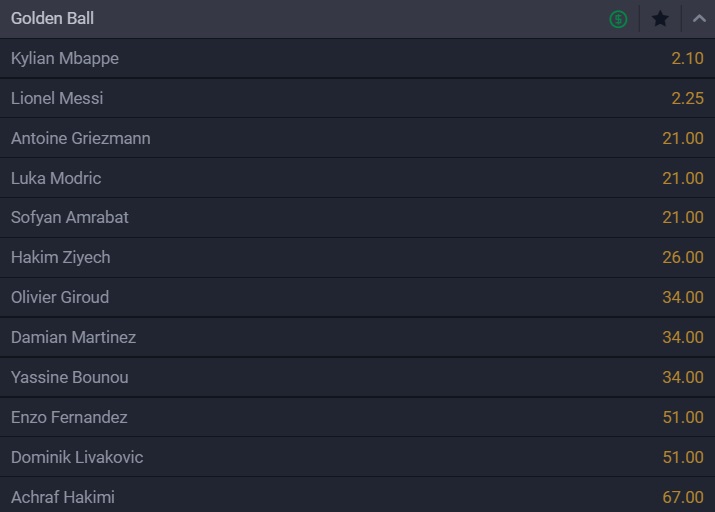 The Golden Glove award (formerly known as the Lev Yashin award) brings more team luck than the Golden Ball. Since 1994, when it was first given out, it has been awarded to the starting goalkeeper of the World Champions 4 times, while 3 times it was won by a goalkeeper who didn’t also lift the trophy.

The favourite as of now is Dominik Livakovic, who saved three penalties in the penalty shootout against Japan and two in the one against Brazil. The second most likely, according to the World Cup odds, is Yassine Bounou, who has only conceded one goal (that own-goal we discussed earlier) in the tournament.

See the detailed World Cup odds for the best goalkeeper of the tournament.

This is (ironically) the oldest official World Cup Award, first given in 1958 to a then 17-year-old Pele. Ever since it has been won by some football legends at a young age, like Florian Albert, Franz Beckenbauer, and Robert Prosinecski. The only parameter here is that a player has to be at most 21 years old to be considered. This is the only award where we see an already eliminated footballer be in content for. And for good reason, as 19-year-old Jude Bellingham had a fantastic tournament.

See the World Cup odds for the Best Young Footballer. 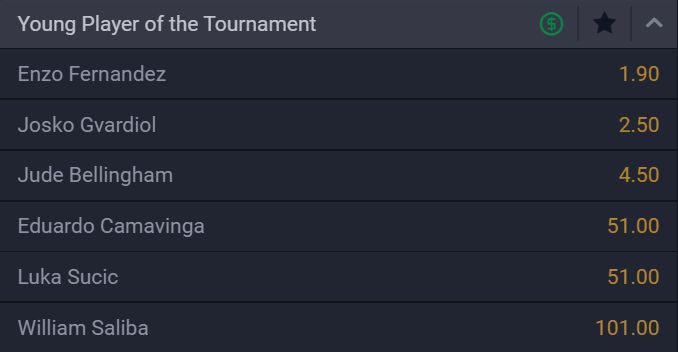